Following the success of VLone, which was founded by A$AP Mob member Jabari Shelton, better known as A$AP Bari started the streetwear label VLone in 2011. He stated in an interview with Mass Appeal that much of his influence came from trying on and stealing clothes with his friends while living in Harlem, NY where he could feel the fabrics of high-value brands.

In 2014, VLone debuted its first collection in preparation for fellow A$AP Mob member A$AP Rocky, who’s instrumental album Beauty And The Beast.  Soon, it was worn by many A-list celebrities such as Wiz Khalifa who can be seen wearing a VLONE sweatshirt in his latest ‘Day Today’ episode. 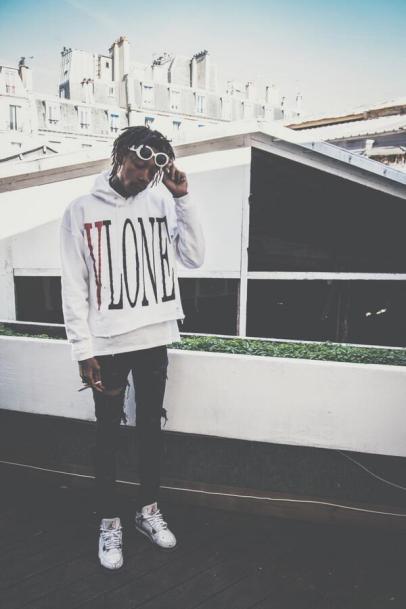 Everything seemed to be going well, but on 12 July 2017, a video emerged alleging sexual misconduct between A$AP Bari and an unidentified nude woman. He later stated that the video was between “friends” and that they had “resolved this issue among all parties as adults”.

On 31 July 2017, a Nike spokesman confirmed that the Vlone deal with A$AP Bari was terminated following the release of the video due to the woman filing the lawsuit anonymously, as Jane Doe, and says the attack happened on July 9 in a London hotel where some members of the Mob were staying. In the documents filed, the woman claims A$SAP Bari burst into her hotel room while she was sleeping and began yelling, “You f—ed my assistant, now you are going to f— with me.”

According to the alleged victim, A$AP Bari’s attorney pressured her to release a joint statement saying that there was no assault. She is now suing A$AP Bari for over $1 million US dollars.

However, VLone’s wave has yet to falter, as many celebrities are still wearing and giving exposure to VLone. For example, the Grammy nominated Hip-Hop artist Lil Uzi Vert can be seen sporting a VLone 2018 Spring/Summer FRIENDS, denim jacket in his The Way Life Goes music video.